Flipping through his sketchbook of watercolor paintings, the delicate brushstrokes and soft hues rendering them ethereal, Kimsoy wistfully describes the breathtaking views that inspired them. Fishing boats docked against the half-light of the Samboan horizon, and mighty waves crashing against the bedrock of Tumalog Falls—water has always given life to his work.

Born Jose Yap Jr. in Negros Occidental, Kimsoy’s artistry once brought him to New York before eventually returning him to his base in Cebu. Every so often, though, a siren’s song—or an artistic calling—draws him back to the solace of the sea. 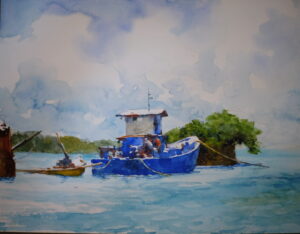 “I like the way it looks when you’re done with the painting because it comes out very fresh,” Kimsoy says about his beloved watercolors. But despite the years under his belt, he doesn’t deny the medium’s demanding reputation. “You have to play it safe with watercolors because you have to do the light areas first before the dark ones.”

More than a labor of love, watercolors were mainly a practical choice for Kimsoy when he first started painting, being all that was affordable to him in high school. Decades later, staples in his Naga studio include high quality brushes and paints from brands like Schmincke, da vinci, and Raphael, some imported from Germany.

An influential figure in Kimsoy’s art practice was his boyhood mentor, renowned Cebuano painter Martino Abellana. The reputed “Dean of Cebuano Painters” stepped in to teach him paint at a time when Cebu lacked Fine Arts programs. He fondly recalls the summers he spent under Abellana’s tutelage, and it’s clear his appreciation goes beyond formal training.

“I was lucky to have Mr. Abellana as my teacher. He taught me a lot of things. He was almost like a second father to me. . . . He was a very humble person and very generous with his time.” 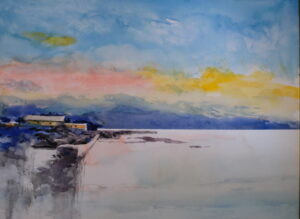 While Kimsoy’s practice is composed of figures and landscapes, he admits that he is partial towards seascapes. Many of the sweeping coastlines he paints are done on location all over the Philippines, especially in the Visayas.

“When I need something to paint, I go to the ocean,” he explains. “I go swimming and then after that, I do my paintings.”

Kimsoy regards the Philippine beaches he frequents as “calming and peaceful,” in stark contrast to his turbulent experiences abroad. While studying in the National Academy of Design School of Fine Arts in New York, he struggled with unemployment and racial discrimination. “It was like a culture shock. . . . I had nobody to turn to, no friends around, and it was very lonely.”

Still, he remained in the United States for two decades, attributing his resilience to hard work and continuing to do art. Upon returning to the Philippines, he went on to teach painting at the University of San Carlos for another twenty years before retiring. 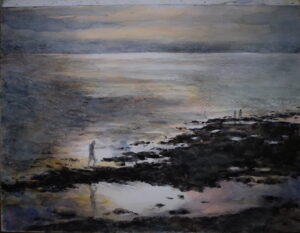 In the years since, Kimsoy has cemented himself as one of the region’s most respected artists. As a household name in the local art community, he serves as an inspiration to a generation of budding creatives, which he is happy for.

No longer painting as frequently in his twilight years, Kimsoy unearths several of his old works for this year’s exhibition. Most of them are landscapes, with a few nude figures. “My nudes are okay. They’re not vulgar,” he jokes.

After all these years, Kimsoy continues to do what he does—paint, which he likens to play. “It’s like a discovery. Sometimes you don’t know where you’re going or where you’re coming.”

Art is a place of solace for him as much as the sea.

Tubô Cebu Art Fair is honored to feature the works of Kimsoy Yap in its Signature Collection, alongside other esteemed artists. His watercolor figures and landscapes will be displayed in the physical fair from September 16 to 18, 2022. Tubô will also be running an online art sale from September 11 to 18, 2022.